U.N. Inaction on China
All Actions of the UN Human Rights System Critical of Specific States, 2007 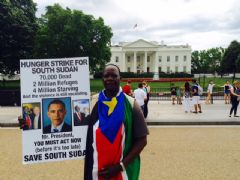 "A security guard reacts at the construction site of the National Olympic Stadium, also known as the "Bird's Nest", in Beijing May 17, 2007. China has executed far fewer people since being awarded the 2008 Olympics six years ago but the country's poor image on rights still threatens to mar the Games, a human rights campaigner said."
Source: Alfred Cheng Jin/Reuters

Statistics in the China Law Yearbook show prosecutors approved the arrest of 604 people on state security charges in 2006, up from 296 the previous year, the San Francisco-based Dui Hua Foundation said.

"This dramatic increase in arrests confirms the heightened crackdown on dissent in China that we've been witnessing since at least the middle of 2005," Dui Hua executive director John Kamm said in a statement.

The increase comes despite the pressure on China's ruling Communist Party to improve its human rights record ahead of the 2008 Olympics in Beijing.

State security cases encompass a variety of crimes, including subversion, providing state secrets to overseas entities and "splittism", the charge levied against those who advocate independence or autonomy for the border regions of Tibet and Xinjiang.

Dui Hua, which works to secure the release of political prisoners in China, maintains a database of such detainees. But the group said that few of those listed in the Law Yearbook on state security charges appeared in their database, suggesting that political arrests in China have been taking place on a larger scale and under greater secrecy than in past.

Among those implicated on such charges were Gao Zhisheng, an outspoken human rights lawyer and two sons of Rebiya Kadeer, an activist member of China's ethnic Uighur minority."