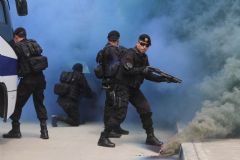 At least seven people have been killed in protests in Colombia as outrage spreads over the death of a man who was pinned to the ground and repeatedly tasered by police in BogotÃ¡.

Video of the incident shows 46-year-old Javier OrdÃ³Ã±ez begging the officers to stop and telling them "I am choking".

The officers were arresting him for allegedly breaking social distancing rules by drinking with friends.

He was taken to a police station and later moved to hospital, where he died.

What's the latest on the protests?

At least seven people have died in the protests in the capital, BogotÃ¡, in in nearby Soacha. Defense Minister Carlos Holmes Trujillo said five of those who died had been shot. He also offered a reward for information leading to the capture of "the perpetrators of the murders".

BogotÃ¡ Mayor Claudia LÃ³pez said 248 people had been injured, of which 58 had received gunshot wounds. Ms LÃ³pez added that more than 100 police officers had also been hurt.

She said that no one had ordered police to shoot at protesters, especially not in an indiscriminate way, but that there was evidence that that was what had happened in some areas.

The protests were centred on the neighbourhood of EngativÃ¡, where police arrested Mr OrdÃ³Ã±ez. Hundreds of protesters clashed with officers outside the police post where Mr OrdÃ³Ã±ez was held. More than 40 such posts, small police stations dotted across the city which often consist of only one room, were attacked and 17 were burnt down.

There were also protests in Soacha, south of BogotÃ¡, in Colombia's second biggest city, MedellÃ­n, and in the city of Pereira. More than 70 vehicles were damaged, among them nine public buses, which were set alight.

What triggered the protests?

The protests broke out after video emerged of the arrest in the early hours of Wednesday of Javier OrdÃ³Ã±ez in EngativÃ¡.

The video shows Mr OrdÃ³Ã±ez pinned to the ground by two police officers in a residential street.

One of the officers repeatedly uses his taser on Mr OrdÃ³Ã±ez, who can be heard saying "enough please, enough, no more, please" and "I'm choking".

The person who is recording the incident on his phone, can also be heard pleading with the officers. "He's telling you 'please', we're recording you, don't continue... why do you continue harming him if he's said 'please'?," the man recording the video says.

The last thing the video shows is a third officer arriving.

Mr OrdÃ³Ã±ez was taken to a local police post and was already unconscious by the time his friend arrived at the post to ask for him.

"When I arrived, my friend was practically dead, he was not moving. So I began to yell at police and told them, 'please help him, let's take him to the hospital'," Juan David Uribe told Reuters TV.

Mr OrdÃ³Ã±ez was transferred to a local hospital where doctors declared him dead a short time later.

The cause of his death has not yet been made public, but Mr OrdÃ³Ã±ez's sister-in-law said the family had been told that he had been tasered 12 times. "They told us that a person can endure more or less four," she added.

What lead to his arrest?

Mr OrdÃ³Ã±ez, a father of two who was about to graduate as a lawyer, was socialising with friends in his flat on the night of the incident.

His friends say that when they ran out of alcohol, they went out to stock up. They say that on their return they were stopped by police who told them they would be fined for breaking social distancing rules and drinking in the street.

It is not clear how that situation ended in Mr OrdÃ³Ã±ez being pinned to the ground and tasered.

The video shows a quiet street and only two other voices can be heard urging the police politely to stop.

What reaction has there been?

The two police officers have been suspended. Defence Minister Carlos Holmes Trujillo said there would be an internal investigation into the incident. The case is also under investigation by the prosecutors' office.

President IvÃ¡n Duque said there would a "rigorous investigation".

The mayor of BogotÃ¡, Claudia LÃ³pez, condemned what she called "unacceptable police brutality" but she also urged protesters to refrain from vandalism and violence. "Destroying the city won't put an end to police abuses," the left-wing mayor said.

There has been outrage on social media, where the video of Mr OrdÃ³Ã±ez being tasered is being widely shared and the hashtag #ColombiaLivesMatter is trending. Many are comparing what happened to Mr OrdÃ³Ã±ez to the case of George Floyd, whose death in police custody in the US led to a wave of protests against police brutality.

What's the track record of the police?

According to Mayor LÃ³pez, there have been 137 complaints of police brutality in BogotÃ¡ this year. Ms LÃ³pez has urged the police to investigate all the complaints.

It is not the first time the capital has seen widespread protests against police brutality. In November, tens of thousands of people took to the streets in memory of Dilan Cruz, a student who died after being hit by a projectile fired by riot police during an anti-government protest.

And in 2011, there was an outcry after a 16-year-old graffiti artist was shot dead by police after spray painting at a bridge. The police officer behind that shooting was sentenced to 37 years in prison in 2016.