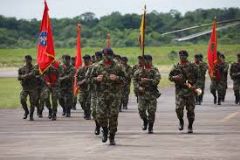 Colombian soldiers have been accused of raping a 15-year-old indigenous girl, in the second such case to emerge in a week.

Troops in the southern Guaviare region were accused in September of kidnapping, torturing and repeatedly raping a 15-year-old girl from the Nukak MakÃº tribe, but the case was not widely reported until this week.

The girl was reported missing from her reserve on 8 September and found naked five days later, having been held in a nearby military barracks, according to an investigation carried out by the local analyst and political scientist Ariel Ãvila.

Local authorities were informed at the time but Ãvila â who will publish his complete findings on Tuesday evening in the local magazine Semana â has accused the local public prosecutor's office of negligence.

The allegations shocked a nation still reeling from a similarly horrific crime: the gang rape of a 13-year-old indigenous girl by seven soldiers earlier on 22 June.

Protesters ignored the country's lockdown to demonstrate outside military barracks in BogotÃ¡, while many took to social media to express outrage.

"We are fed up with abuses against indigenous people," tweeted MÃ³nica RodrÃ­guez, a well-known TV presenter. "We want punishments to be examples."

"Open your eyes," tweeted Adriana LucÃ­a, a pop singer and activist. "We cannot go on as though nothing is happening."

On Tuesday morning, the general in command of the army's fourth division, which oversees the densely jungled Guaviare region, said that an investigation was opened in September when the case was first reported. He added that the suspected soldiers had been moved to administrative jobs within the army, though he would not say why it had taken so long for news to reach the public.

"I do not know the reasons why that fact did not come to light," Antonio MarÃ­a BeltrÃ¡n, the general, told the local Blu Radio station on Tuesday morning. "However, I will say that we as an institution are not hiding anything from anyone."

Colombia's army has been implicated in countless abuses over recent decades, often under the banner of fighting against insurgent groups.

Between 2002 and 2008, soldiers abducted and murdered thousands of civilians, declaring them rebel combatants in order to boost kill statistics. Earlier this year, it was revealed that soldiers had been spying on journalists thought to be investigating the military.

"For decades, commanders in the Colombian army have supported and backed their soldiers implicated in serious crimes â or helped them cover their abuses," said JosÃ© Miguel Vivanco, the Americas director of Human Rights Watch, on Tuesday morning. "It is unsurprising that it took the army almost nine months to acknowledge that its soldiers were allegedly implicated in this abhorrent crime."