U.N. Inaction on Libya
All Actions of the UN Human Rights System Critical of Specific States, 2014 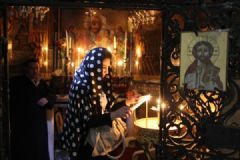 An Egyptian Christian couple were murdered and their daughter kidnapped on Tuesday in Libya in what Libyan officials said may have been an attack motivated by religion.

He added that the killers abducted the couple's 18-year-old daughter, leaving her two younger sisters behind. Tebeiqa said the attack may have been motivated by religion.

"Money left on the table and the wife's jewellery left at the crime scene were not touched," he added.

Several Coptic Egyptians have been killed in Libya in the past two years.

In February, the bodies of seven Egyptian Christians who had been shot were found near the second city of Benghazi. Several thousand Egyptians work in Libya, mainly in the construction and craft sectors.

Members of the North African country's Christian minority have said they are worried about the rise of Islamist militant groups since the fall of longtime ruler Moamer Qaddafi in 2011.

Sirte, Qaddafi's home town, is now in the hands of Islamist militias including Ansar al-Sharia, which the UN Security Council last month added to its terror list over links to Al-Qaeda and for running Islamic State group training camps.