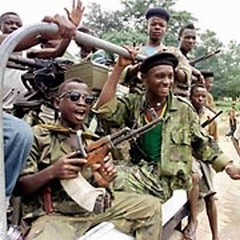 "MASSA KAMARAH is only nine years old but she is racked with guilt: she blames herself for her mother's death from drinking "bad water". She has somehow acquired a memory of refusing to bring her a cup of clean water.

The truth is that her mother Kadi Sowa killed herself by drinking caustic soda. The 27-year-old nurse could no longer cope with the stigma of having been a sex slave forced to service the rebels of the Revolutionary United Front (RUF) who terrorised Sierra Leone from 1991 to 2002, hacking off the limbs of men, women and children in the villages they attacked.

The suffering of sex slaves such as Sowa and children such as Massa - conceived as a result of RUF rape - will be one of the most harrowing issues in the war crimes trial of Charles Taylor, the former president of neighbouring Liberia, which resumes in the Hague tomorrow.

Taylor, who is accused of arming the RUF in return for diamonds, faces 11 charges including responsibility for sexual slavery practised by the rebels. He denies that he ordered, supported or condoned such acts.

Whatever the outcome, the story of Sowa and her little girl highlights not only the sexual violence endured by as many as 250,000 Sierra Leonean women during the war, according to Amnesty International, but its power to destroy lives for years afterwards.

Sowa was held by the RUF for two years, during which she was repeatedly abused. She was ordered to provide nursing care for the rebels, who also made her take drugs.

Eventually, the child's aunt and grandmother offered to take Massa and her half-sister Abutatu Sissi, who had been born before the war, so that Sowa could resume nursing.

But the aunt's village neighbours resented Massa as the offspring of rebel soldiers who had caused carnage among them. So she took the girls to a friend of their mother's, Ishatu Cole, who worked for the Red Cross in the town of Bo.

Cole's husband accepted Massa's sister but threatened to divorce Cole if she insisted on looking after a rebel's daughter. Massa was placed in an orphanage.

Her mother travelled to Freetown, the capital, to nurse. Eventually she could no longer bear her life and drank a full glass of caustic soda.

Massa was nowhere near at the time but has a confused memory of events. "Mama asked me to give her water and I refused," she insists, her big eyes brimming with tears. "She drank the soap water and she died."

Of the countless women compelled to serve the RUF as sex slaves, large numbers felt such shame that they never returned to their communities. Others live in virtual silence, unable to share painful memories for fear of being rejected. Those who bore children often struggle to care for them.

Taylor's trial, which is expected to last 18 months, will turn on arguments about his alleged financing and arming of the RUF. For Massa, it will mean little. What matters to her is that she is separated from her sister and the aunts she loved. "I cried because I didn't want to leave my grandmother and auntie," she said.

She explained that she had been given a new aunt at the orphanage where she is expected to remain for the rest of her childhood."