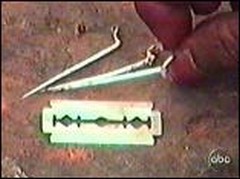 "Zaineb Tarek grew suspicious when relatives bundled her into a minivan and plied her with potato chips and sweets for a "special trip" to see the doctor. A feisty 7-year-old, she kicked and screamed when they pinned her to a table in the rural clinic near her village of Eneiba in southern Egypt.

Then she saw the razor. The doctor sliced down on her genitals, deftly removing part of her clitoris. She shrieked and flailed, furiously brushing aside her mother's attempts to calm her.

"I screamed at her, `You're not my mother! No mother would ever do that to her child!'" recalled Tarek, who's now a slender 12-year-old with a pink veil framing her face....

The practice is nearly universal in Egypt. A government survey released last year found that 96 percent of Egyptian women who've been married have undergone some sort of genital mutilation and that nearly 70 percent of schoolgirls expected to be cut by the time they turn 18.

Those numbers encompass women across Egypt, from illiterate villagers to urban Cairenes and across religious lines. Researchers found, for example, that nearly all Coptic Christian women undergo female genital mutilation, with church figures waging their own battles against it.

Although the practice persists in Sudan, Somalia and a handful of other African or Middle Eastern nations, Egypt has the highest rate of female genital mutilation in the Arab world, according to surveys by the government and human rights activists."