U.N. Obsession with Condemning
Israel Instead 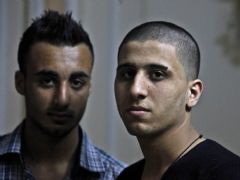 Police in Hamas-ruled Gaza have started grabbing young men with long or gel-styled spiky hair off the streets, bundling them into jeeps, mocking them and shaving their heads, two of those targeted and a rights group said Sunday.

It is the latest sign that the Islamic militants are imposing their strict practices on the population.

Hamas has been slowly forcing its fundamentalist interpretation of the religion on already conservative Gaza since it overran the territory in 2007, but the new crackdown on long hair and tight or low-waist pants - in several cases accompanied by beatings - appears to be one of the most aggressive phases of the campaign so far.

The crackdown began last week, and two of those targeted told The Associated Press said they were rounded up in separate sweeps in Gaza City that included more than two dozen young men.

House painter Ayman al-Sayed, 19, had shoulder-length hair before police grabbed him and shaved his head Thursday.

"The only thing I want to do is leave this country," said al-Sayed, who despite his ordeal defiantly wore stylish but outlawed narrow-leg tan khakis Sunday. "I am scared. They just take you from the street without reason. I don't know what they are going to do next."

Hamas officials played down the campaign - a stance adopted in the past that allows the group to distance itself from a controversial crackdown while at the same time instilling fear in those it targeted.

Ziad al-Zaza, the deputy prime minister of Gaza, said the head-shaving "was a very limited, isolated behaviour of the police and is not going to continue."

The only thing I want to do is leave this country

The Palestinian Center for Human Rights called on Hamas to investigate the "arbitrary detentions and violations of civil rights of civilians." The hair crackdown came just days after the Hamas-run parliament in Gaza passed an education bill mandating separate classrooms for boys and girls from the age of nine.

Gender separation is already widely practiced in Gaza schools, as it is in the West Bank, where Hamas rival Mahmoud Abbas, the Western-backed Palestinian president, administers some areas.

Enshrining such separation in law marked another step forward in Hamas' campaign of imposing Islamic practice.

Since seizing Gaza from Abbas six years ago, Hamas has moved gradually in spreading its ultra-conservative version of Islam. It has issued rules restricting women or requiring them to cover up in the traditional Islamic dress of long robes and headscarves, but relented if met by protests.

Last month, the Hamas government barred girls and women from participating in a U.N.-sponsored marathon, prompting a U.N. aid agency to cancel the race. Hamas activists have also exerted social pressure to get all school girls to wear Islamic dress.

Al-Sayed, the house painter, and 17-year-old high school student Tareq Naqib said Sunday that they were targeted by police in separate incidents Thursday.

Al-Sayed said he had just finished his work in Gaza City and was waiting at an intersection for a shared taxi when a police jeep approached. Al-Sayed said he was thrown into the jeep with more than 10 others already squeezed into the back of the vehicle. He said policemen cursed them on the way to the police station.

There, the detainees were lined up, and a policeman began shaving their heads. He shaved two lines, from front to back and from one ear to the other, telling the young men they could finish the job at a neighbourhood barber shop.

A young man came into the police station, saying he was looking for his cousin, said al-Sayed. One of the officers grabbed the young man, who had his hair in gel-styled spikes, and shaved his head as well.

Naqib, the high school student, said he was seized outside his home and put in a police jeep along with four young men who had come to Gaza City from the southern town of Khan Younis.

On the way to the police station, police insulted them and warned them that Gaza is Islamic, said Naqib.

"They said, 'we want you to respect our tradition,"' Naqib said. "They made a cross on our heads and asked us to leave and finish the shaving at a barber shop."

Naqib's family is originally from Tunisia, and he said he wants to go back there after he finishes high school.

In another incident, a Gaza teen, who spoke on condition of anonymity for fear of retribution, said he saw police beat three young men in downtown Gaza City for wearing tight, low-rise pants. The witness said the policemen beat the three with clubs on the backs of their knees and told passers-by watching the scene to move along.

Ahmed Yousef, a Hamas figure identified with the more pragmatic wing of the movement, said the police behaviour is "absolutely wrong" and must stop. Hamas is often divided over such campaigns, but the pragmatists have been unable to stop the more zealous members. Hamas is also competing with the even more fundamentalist Salafis, a movement that has gained in strength and popularity in Gaza in recent years. Salafis have criticized Hamas for not implementing Islamic law in Gaza quickly enough.

For Gaza's young generation, such crackdowns have meant a shrinking space of self-expression. In some, it sparked defiance. Mohammed Hanouna, an 18-year-old high school senior, said he started styling his hair with gel after his friends Ayman and Tareq were targeted by police.

On Sunday, he walked with them in the streets in a show of support, adding that he is not afraid of arrest. "I have nothing to lose except my hair.