U.N. Inaction on Turkmenistan
All Actions of the UN Human Rights System Critical of Specific States, 2006 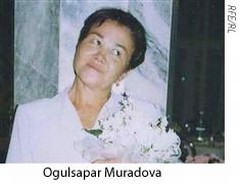 "Journalist Ogulsapar Muradova was murdered in a Turkmen prison after one of her children challenged police surveillance methods... National Security Ministry officers took Muradova, a correspondent for the US-funded Radio Liberty/Radio Free Europe and a human rights defender, into custody in June on suspicion of conspiring to engage in espionage. Two other local human rights activists, Annakurban Amanklychev and Sapardurdy Khajiyev, were also arrested in the case. Turkmenistan's despotic leader Saparmurat Niyazov at one point publicly characterized the trio as "traitors to the Motherland." In the end, Muradova and her co-defendants were charged only with illegal arms possession under Article 287 of the country's criminal code. The defendants insisted that the case against them was fabricated. In a trial that lasted only a few minutes, Muradova was convicted and received a six-year jail term. The others received seven-year sentences... In the early morning of September 14, state security agents went to the Muradov family home, telling Berdy and two other grown children that their mother had died... According to [the exiled head of the Turkmenistan Helsinki Foundation, Tajigul] Begmedova, the corpse showed numerous signs of trauma. "There was a huge wound on her forehead and marks on her neck," Begmedova told Amnesty International. The signs suggested that Muradov had experienced a powerful blow to the head from a blunt object, as well as suffered from strangulation."