U.N. Inaction on Pakistan
All Actions of the UN Human Rights System Critical of Specific States, 2013 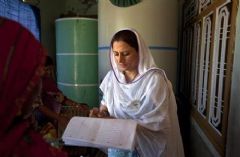 In Pakistan Town, Men Have Spoken: No Women Vote

MATEELA, Pakistan (AP) - For decades, not a single woman in this dusty Pakistani village surrounded by wheat fields and orange trees has voted. And they aren't likely to in next week's parliamentary election either. The village's men have spoken.

"It's the will of my husband," said one woman, Fatma Shamshed. "This is the decision of all the families."

Mateela is one of 564 out of the 64,000 polling districts across Pakistan where not a single woman voted in the country's 2008 election. The men from this village of roughly 9,000 people got together with other nearby communities to decide that their women would not vote on May 11 either.

Next week's election will bring a major first for democracy in Pakistan - the first time a civilian government has fulfilled its term and handed over power to another. But women still face an uphill battle to make their voices heard in the political process, as voters, candidates and in parliament, where they hold 22 percent of the seats in the lower house.

Women represent only about 43 percent of the roughly 86 million registered voters, according to election commission data. In more conservative areas like Khyber Paktunkhwa province and Baluchistan, the percentage drops even further.

In places like Mateela, the fact that men decide women should not be allowed to vote is a decades-old tradition. Some men say women don't have the mental capacity. Other times they don't want wives and daughters to leave the house. Some simply don't see the point.

At a recent gathering in the village, about 100 miles (160 kilometers) south of Islamabad, activists tried to encourage the opposite. The Association for Gender Awareness & Human Empowerment, an independent group working to increase voter participation, met with residents, trying to encourage them to let women vote.

Mateela's men sat with male activists in a courtyard near the village mosque. Secluded behind a gate, the women sat on a concrete floor and listened to a female activist talk about the benefits of voting.

Yar Mohammed, one of the village elders, insisted it isn't a matter of discrimination. The problem, he said, is that the local polling station is mixed gender. The men worry that their wives and daughters will be harassed, so they want a separate women's station. In some places, but not all, polls are specified for men or women only.

"We stop our women from going to polling stations because we think if they do, men would tease them by staring or touching them," he said.

Mateela's women certainly want a political voice. They talk of their desire to see better roads, schools where their daughters can get an education and a reliable supply of gas for cooking and heating.

They don't directly defy their fathers and husbands - but they do lobby them to change their minds.

One resident, Mohammed Shamshed, said the women in his family "come up to us and say, 'We want to vote.'"

"But we tell them that it is a collective decision," he said.

Rubina Arshad said things are slowly starting to change as men and women become more educated. "This is the tradition and the culture, from many, many years ago. We could not cast the vote," she said.

Another deterrent to women voting has been that many don't have the proper identification card, called a CNIC card. Historically, many men in conservative areas haven't seen the need to send their wives or daughters to get the ID card or haven't wanted to pay for it.

But activists say that has begun to change in recent years - in large part because it makes more financial sense for men. Poor women who want to receive money through the Benazir Income Support Program, a government plan to give money to poor people, need a valid ID card. And many programs that give out aid to flood victims or people displaced in fighting in the tribal areas also require an ID card.

"These two have tremendously enhanced the registration of women," said Muddassir Rizvi, CEO of the Islamabad-based Free and Fair Election Network. "If they see an advantage of a relationship with the state, then they agree to things."

There are other encouraging signs as well, with more women competing in the elections.

In Pakistan, 60 of the 342 seats in the lower house of parliament, known as the National Assembly, are reserved for women. They are handed out to parties in proportion to how they do in the overall race, so women don't have to campaign publicly for them. But women can also run for the general seats, in competition with men on the campaign trial. In 2008, 64 women ran for general seats and 18 made it to the parliament.

This year, the number of women contesting general seats has jumped to 161, out of a total of 4,671 candidates, according to data provided by U.N. Women, which focuses on women's empowerment and gender issues. Elections for provincial assemblies saw a bigger rise, with 355 women running among nearly 11,000 candidates, up from 116 in 2008.

The type of women running has also changed.

Traditionally, many female candidates have been from wealthy, land-owning families and were seen more as a continuation of political dynasties than as women entering politics in their own right. Benazir Bhutto was famous for being Pakistan's first female prime minister, but she was also the daughter of a powerful political family.

Experts say many of the women running this year are from the middle or even lower classes. A woman in the tribal area of Bajur is running for parliament, marking the first time a woman has ever run for election from the conservative tribal areas that border Afghanistan. In the southern city of Hyderabad, a Hindu woman is also running for election.

Still, the number of female candidates is extremely low, and most run as independents without the support of a political party. The Pakistan People's Party, the party that Bhutto headed before her assassination in 2007, is fielding women candidates in only 7 percent of the races. A PPP spokeswoman, Sharmila Farouqi admits that is not enough.

"There is a perception that women cannot contest elections against men due to many reasons," she said. "There is a need to encourage and support women."

When they do get into the parliament, women tend to get down to business.

The women also banded together to help pass five pieces of important legislation protecting women, including laws against sexual harassment in the workplace, according to Farkhanda Aurangzeb, from the Islamabad-based Aurat Foundation.

In Mateela, the men say they are willing to let women vote if the election commission sets up a separate polling station. But the commission said that isn't possible because the voting lists had already been finalized.

Abdul Hamid Abbasi, an activist from AGAHE, tried to convince the tribal elders that allowing women to vote will increase their power at the polls.

"You can change your fate by electing a good candidate," he says. "It won't be possible without the active participation of women voters."