U.N. Inaction on India
All Actions of the UN Human Rights System Critical of Specific States, 2014 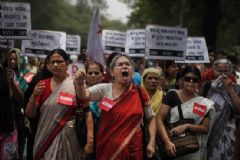 A 14-year-old girl was raped on the orders of a village leader in northern India, police said, as a form of punishment against her brother.

The girl's brother had been accused of trying to assault another woman.

According to police, the rape victim says she was raped by the husband of the other woman, a punishment for the brother's alleged actions decided by the village of Swang's unelected headman.

The accused rapist and the girl's brother were in police custody Friday and hadn't been charged, according to spokesman for the Jharkhand police. Police also arrested the village chief, and said the investigation is continuing.

The men couldn't be reached to comment. None of the three have hired lawyers, according to police.

The case echoed a similar case that stirred a national outcry in January when a 20-year-old woman in the eastern state of West Bengal was allegedly gang-raped by a village chief and 12 other men as punishment for dating a man outside her community.

In India, unelected and informal village councils are commonplace, even though they have been deemed illegal by India's Supreme Court. They are separate from elected village councils, which have local governance roles.

India's efforts to combat crimes against women accelerated after a young student in late 2012 was gang-raped and murdered by six men on a bus in New Delhi. That attack triggered a national dialogue on the safety of women in India and led to a sweeping overhaul of harassment laws, including the imposition of the death penalty in some rape cases. In some rural areas of India, though, longstanding traditional social norms still hold sway.

After Monday's attack, the police spokesman said, the girl arrived along with her father at a nearby police station. "Her clothes were smeared with blood," he said. After recording her statement, police took her to a nearby hospital, he said.