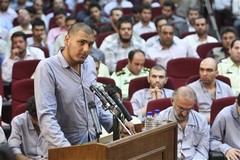 In this photo released by the semi-official Iranian Fars News Agency, an unidentified defendant speaks at the court room, in Tehran, Iran, Sunday, Aug. 16, 2009. Iran put on trial Sunday 25 more activists and opposition supporters, including a Jewish teenager, for their alleged involvement in the post-election turmoil. (AP Photo/Fars News Agency, Hasan Ghaedi)
Source: The Associated Press

TEHRAN, Iran - Iran expanded a mass trial of opposition supporters on Sunday with the addition of 25 defendants - including a Jewish teenager - in defiance of international condemnation, as France said Iran agreed to release a French woman held on spying charges from prison.

The defendants are among more than 100 people charged with plotting a "soft revolution" against the Islamic theocracy during the postelection protests. The mass trial is part of an attempt to put an end to the protests by those who say Mahmoud Ahmadinejad's June 12 re-election was the result of fraud.

In apparent attempt to fend off criticism and move ahead with his second term, Ahmadinejad named three women who, if confirmed, would be Iran's first female Cabinet ministers since the 1979 Islamic Revolution.

The trial, now in its third session, has included a number of televised confessions and has drawn international condemnation from human rights groups that allege the confessions are coerced. The U.S. last week labeled the event a "show trial." The trial and official acknowledgments that some detainees have been abused in prison have only added to anger among both opposition supporters and some conservatives upset with the treatment of protesters.

The additional defendants brought the total number being tried to 135.

The defendants include a number of high-ranking politicians linked to the country's pro-reform movement as well as employees from the British and French embassies and an Iranian-Canadian reporter for Newsweek magazine.

A 24-year-old French academic, Clotilde Reiss, who had appeared during one of the previous court sessions, was freed Sunday from an Iranian prison, the French president's office said late Sunday.

She was arrested July 1 for attending a postelection demonstration. During her court appearance, Reiss apologized for attending the demonstration but said she did so because she was curious. The French Foreign Minister has said the statement was "worked on," suggesting it was coerced.

The French president's office said it was asking for all charges to be dropped against Reiss and that she'll be residing at the French Embassy in Tehran until she can return home.

France is also asking for all charges to be dropped against another of its citizens, Nazak Afshar, who has dual French-Iranian citizenship and worked at the French Embassy. She appeared during a previous court session before being released from prison. She's now residing at the French Embassy in Tehran. French Foreign Minister Bernard Kouchner later said on the iTele TV station that bail was paid for Reiss but that the sum was "not enormous."

While she stays at the embasssy, Reiss will prepare her defense "to make her innocence known," Kouchner said in a statement. He also reiterated the charges against her and the French-Iranian embassy employee, Nazak Afshar, were "unfounded." At Sunday's hearing, officials showed a film of attacks on public property, cars and a mosque by protesters, and the prosecutor accused the defendants of plotting the postelection turmoil years in advance.

One of the new defendants was Yaghoghil Shaolian, 19, a member of Iran's Jewish community, which numbers about 25,000 people. He was quoted by the semiofficial Fars news agency as saying that he was not an activist but that he got caught up in the moment and threw stones at a Tehran bank during a protest. Iran's only Jewish parliamentarian, Siamak Mereh Sedq, confirmed the detention of Shaolian and his Jewish identity to The Associated Press. He said the detention was not connected to his religion and that Shaolian is innocent.

Ahmadinejad's decision to appoint three women to his Cabinet appeared to be an attempt to mollify the opposition and some of his conservative supporters while currying favor with women. Marzieh Vahid Dastgerdi, a 50-year-old gynecologist, will become health minister and Fatemeh Ajorlu, a 43-year-old lawmaker, will be minister of welfare and social security, Ahmadinejad said. He said he'll nominate at least one more woman to the Cabinet, but did not give a name.

Ahmadinejad's chances of using the nominations to win over the opposition seems slim as the two women he named are considered fellow hard-liners.

Women took part in large numbers in the street protests that followed the disputed election. Ahmadinejad's attempts as president to enforce a strict dress code on women and the jailing of many female activists has won him few favors with women.

Female politicians are not unheard of in Iran. Although they are barred from the presidency and religious posts, many Iranian women are in parliament and other political offices. Ahmadinejad currently has a female vice president.

But Iran has not had a female Cabinet minister since the 1979 revolution that brought the cleric-led regime to power. The last female minister, Farrokhroo Parsay, was executed on charges of corruption after the revolution.

Ahmadinejad is slated to present his new Cabinet to parliament on Wednesday. Every minister has to be approved by parliament - an uncertain prospect given that some lawmakers have criticized Ahmadinejad for not consulting with them prior to making his nominations.

Ahmadinejad also named cleric Haidar Moslehi as the new intelligence minister to replace Gholam Hossein Mohseni Ejehi, who lost his job in July in an apparent dispute over the handling of the clampdown on the unrest.

"The excellency who talks about change made a big mistake when he openly interfered in Iran's domestic issues," Ahmadinejad told a group of clerics Sunday, according to the semiofficial Mehr news agency.

Iran has tried to taint the unrest by asserting that it is a product of international meddling rather than internal anger. Opposition leader Mir Hossein Mousavi, who claims he was the true election winner, is also consolidating his political forces. According to newspaper reports Sunday, he has announced he will form a new political organization aimed at regaining people's constitutional rights.

Mousavi has not been arrested since the unrest began, although some hard-liners have called for him to be put on trial along with other opposition leaders.