U.N. Inaction on Bahrain
All Actions of the UN Human Rights System Critical of Specific States, 2012 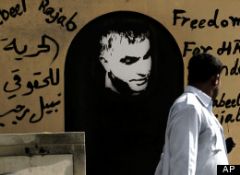 Photo: The Huffington Post
In Augsut 2012, Nabel Rajab was sentenced to 3 years in prison for instigating and participating in "unauthorised" protests against the monarchy.

MANAMA, Bahrain - A court in Bahrain granted bail Sunday for a jailed rights activist, but he remained in detention to await another court hearing later this week, a defense lawyer said.

Mohammed Ahmed said bail was set at 300 dinars ($798) for Nabel Rajab, who was arrested earlier this month as part of the Gulf kingdom's crackdowns on dissent.

Ahmed said a further hearing is scheduled Tuesday for Rajab, president of the Bahrain Center for Human Rights.

At least 50 people have died during unrest in the strategic island nation, home to the U.S. Navy's 5th Fleet.

In Geneva, the U.N. Human Rights Council is scheduled to begin a periodic review of Bahrain on Monday. The group Human Rights Watch urged the council to pressure Bahrain's leaders to allow greater freedom of expression and free "political prisoners."

"We must ask why the government of Bahrain does not release the many prisoners whose only crimes were to demand more political rights," said Joe Stork, deputy director for Middle East and North Africa at the New York-based group.