U.N. Inaction on Iran
All Actions of the UN Human Rights System Critical of Specific States, 2007 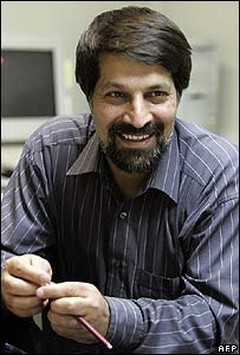 "Mr Baghi is one of Iran's most prominent human rights activists."
Source: BBC News and AFP

"Iranian human rights activist and anti-death penalty campaigner Emaddedin Baghi, held in jail for more than two months, has been hospitalised after suffering a nervous attack, his lawyer said Thursday.

"He has been receiving medical care since Wednesday afternoon when he was taken to a Tehran private hospital," lawyer Saleh Nikbakht told AFP.

"He collapsed twice in his cell in Wednesday morning... his doctor told me the attacks were caused by high nervous pressure," he said, adding that Baghi's condition was now normal.

Baghi has been in Tehran's notorious Evin prison since his arrest on October 12, when he was ordered to serve an outstanding one-year jail term for creating propaganda against the system.

Nikbakht said that according to his latest information, Baghi was still in hospital and had been allowed to meet his family there. He added his client was satisfied with speed of the reaction by the Evin authorities to his collapse.

"Baghi's general state was not good and he was transferred to one of Tehran's hospitals," the director general of Tehran province prisons, Sohrab Soleimani, was quoted as saying by the ISNA news agency late on Wednesday.

Baghi, who heads the Committee for the Defence of Prisoners' Rights, has already served several jail terms in Iran while also receiving awards from Western countries for his work.

According to the charges, Baghi obtained secret information from prisoners and then disseminated this information during seminars organised by his group.

He has publicly protested against the wave of hangings, many in public, that have swept Iran in recent months as part of a campaign the authorities say is aimed at improving security in society.

In September Baghi wrote an open letter to the heads of reformist parties -- including former president Mohammad Khatami and ex-parliament speaker Mehdi Karroubi -- complaining of their silence over the increase in hangings.

In 2005 he was awarded a top human rights prize by France for his work campaigning against the death penalty. New-York based Human Rights Watch (HRW) and the US State Department have both called for his release.

Capital offences in Iran include murder, rape, armed robbery, serious drug trafficking and adultery. The Islamic republic is currently believed to be the second most prolific applier of the death penalty worldwide after China."