U.N. Inaction on Morocco
All Actions of the UN Human Rights System Critical of Specific States, 2016 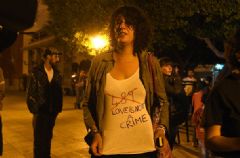 Moroccan activist with the number 489 written on her shirt, in reference to article 489 which stipulates that homosexuality is punishable in Morocco by up to three years in jail, participates in a vigil in Rabat on 15 June

A kiss they shared on a Marrekesh rooftop may result in three years in prison for two teenage Moroccan girls, charged with having committed a "lewd and unnatural act" under the Muslim nation's criminal code, CNN Arabic reported Thursday.

The girls, ages 16 and 17, are being represented in court by the Moroccan Association of Human Rights, an official with that organization told CNN Arabic.

While in recent years Moroccan authorities have put the north African nation as a successful model of a moderate Muslim regime, in October the Party of Justice and Development (PJD), an Islamist group, secured the largest share of seats in the 395-seat parliament and with it the right to assemble a governing coalition.

"For their part, the Islamists have chosen to play by the rules set by the King and they do not seek to impose an Islamist ideology on the country nor challenge the monarch's religious and temporal authority," the Financial Times reported on Oct. 8, adding that "[m]any of the party's supporters cite its anti-corruption drive as the main reason they vote for it rather than its Islamist credentials."