U.N. Inaction on Pakistan
All Actions of the UN Human Rights System Critical of Specific States, 2007 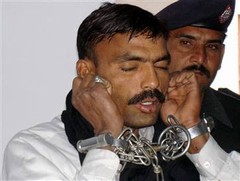 Nazir Ahmed, as he recounts how he slit the throats of his three young daughters and their 25-year-old stepsister to salvage his family's "honor"
Source: USA TODAY

"At least 565 women and girls in Pakistan died in so-called honour killings in 2006, the country's main rights organisation said today, nearly double the number it recorded the year before.

However, it said many more cases may have gone unreported and has estimated in the past that the annual total may be about 1,000.

Many men in deeply conservative rural areas of Pakistan consider it an insult to family honour if female relatives have an affair outside of wedlock or even if they marry without their consent. Some view attacking or killing the women or their partners as a way to restore family honour.

In the report released today, the commission said at least 475 of last year's honour killings followed accusations of "illicit relations". Sixty of the dead were minors.