U.N. Inaction on Pakistan
All Actions of the UN Human Rights System Critical of Specific States, 2008 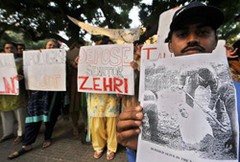 "Pakistan opened an investigation Monday into the killings of five women who tried to choose their own husbands, after a provincial lawmaker defended their deaths as a "centuries-old tradition."

The women, three of whom were teenagers, were shot, thrown into a ditch and buried alive more than a month ago in what authorities have said they suspect were "honor killings." Authorities say they have arrested three relatives of the women in connection with their deaths.

It is considered an insult in some conservative regions of Pakistan for women to have affairs or marry without consent, and rights groups say hundreds are killed by male relatives every year.

The killings - which apparently occurred after the women defied tribal elders and asked a civil court to marry at least three of them - was raised in Parliament on Friday, prompting a lawmaker from Baluchistan province to claim that "only those who indulge in immoral acts should be afraid."

"These are centuries-old traditions and I will continue to defend them," Israr Ullah Zehri, who represents the province where the women died, told the chamber on Saturday.

His remarks - even more than the killings themselves - outraged his fellow lawmakers and spurred protests as well as promises of an investigation.

...Sanaullah Baloch, a nationalist leader from Baluchistan, denied that such brutal justice was embedded in local culture. He blamed the government for failing to provide better health and education services to women and girls in the southwestern province, which remains impoverished despite rich mineral resources.

"Socially and economically marginalized society is always frustrated," Baloch told Dawn News television Monday. Human rights groups say the women were abducted at gunpoint by six men in the remote village of Baba Kot, forced into a vehicle and taken to a field, where they were beaten and shot. Rights activists say they were then covered with rocks and mud while they were still breathing.

The deaths took so long to investigate, rights groups allege, because members of a powerful political family in the province were involved.

Though many honor killings are believed to go unreported, the Human Rights Commission of Pakistan said at least 174 women were victims of such crimes nationwide in 2005, 270 in 2006 and 280 in 2007.

The figure in the first five months of 2008 alone stands at 107, it said. Rights groups complain that few of the culprits are convicted.