U.N. Inaction on Somalia
All Actions of the UN Human Rights System Critical of Specific States, 2015 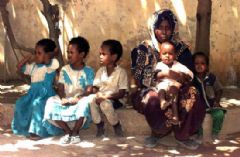 Somalia has been named as the worst country in the world to be a mother this week, according to new figures.

The Save the Children's annual Mother's Index Rankings revealed that the country was the worst in terms child mortality, maternal health, women's income and education. But the problems facing women's rights in the African nation don't end there.

Victims of sexual violence in Somalia are continuing to face persecution and social exclusion.

More shocking stories of women being raped and sexually abused, with the blame squarely placed on the victim, are emerging all the time.

Among them is 14-year-old Fatima who was abducted and raped by a tuk-tuk driver after he spotted her selling sweets on the streets.

When the police arrived they arrested both Fatima and her attacker. Although her abuser was quickly released, Fatima was detained by the police for a month and was repeatedly raped by the prison guard.

Fatima was eventually set free by her aunt and the help of women's charity The Elman Centre.

She is not alone though, it is estimated that around one third of victims of sexual violence in Somalia are children under the age of 18, according to figures from Unicef.

Last year a report from Human Rights Watch revealed that rape was considered "normal" in Somalia with perpetrators rarely brought to justice.

One of the key criticisms by the authors of the report was the failure to put in place laws to safeguard and prosecute those who have committed sexual assaults.

They called on the government to prioritise women's rights and deploy specially trained police officers, along with providing support for victims.

However, there is hope amid these bleak figures. The Elman Peace and Human Rights Centre in Somalia's capital Mogadishu is trying to help those who have suffered at the hands of abusers.

The charity was set up in 1991 by social activist Elman Ali Ahmed and the peace centre was founded by his wife Fartuun Adan.

"Attitudes in Somalia now have changed a lot when it comes to sexual violence because there was a time when no one could talk about it," Ms Adan said.

She went on to explain, "There was a time when we all denied, no one said anything about it, no one was saying 'we have this problem' and now attitudes can be changing because people are accepting it â the problem we have."

While attitudes are slowly changing, the country still has a way to go in implementing legislation and bringing abusers to justice.