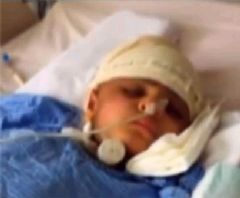 A Saudi preacher who tortured his five-year-old daughter to death has been released after agreeing to pay 'blood money', The Daily Mail reported.

Lama al-Ghamdi died in October having suffered multiple injuries including a crushed skull, broken ribs and left arm, extensive bruising and burns, according to the report.

She had also been repeatedly raped and then burned.

Her father Fayhan al-Ghamdi, a prominent Islamist preacher who regularly appears on television in Saudi Arabia, served only a few months in jail despite admitting to having used a cane and cables to inflict the injuries.

Women's rights activists said al-Ghamdi had doubted Lama's virginity and had her checked up by a medic.

Rather than the death penalty or a long prison sentence, the judge in the case ruled the prosecution could only seek 'blood money', according to activists.

According to the report, the judge ruled the few months al-Ghamdi spent in prison since his arrest in November was sufficient punishment.

A social media campaign is now gaining momentum after the ruling was publicized.