U.N. Inaction on Somalia
All Actions of the UN Human Rights System Critical of Specific States, 2014 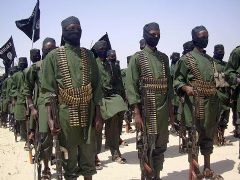 Somali al Shabaab militants stoned a woman to death in the southern town of Barawe on Friday after a court they had set up declared her guilty of adultery, the militants and witnesses said.

The group, which pledges loyalty to al-Qaida, has waged an armed campaign to impose its strict interpretation of Islamic Sharia law. Forced out of many areas of the east African country by African Union forces and the Somali army, al Shabaab is keen to show it has authority over areas it still controls.

Hundreds gathered to watch the killing of Safia Ahmed Jimale in an open field. The 33-year old mother was buried up to her shoulders and pelted with stones by masked al Shabaab fighters and local men.

Some in the audience vomited, said resident Ahmed Abdullahi, who was in the crowd. The killing was witnessed by the al Shabaab governor for the region.

Her body was then dug out of the ground and carried away for funeral prayers, Abdullahi said.

A man who presented himself as an al Shabaab judge said Jimale had confessed to having three husbands. He said the three men were not aware they were married to the same woman and had testified against her.

Jimale had admitted her guilt before the court and declared she was ready to be stoned to secure God's forgiveness, said the unidentified judge.

Courts set up by the militants do not allow legal representation or appeals. Jimale's family could not be reached for comment.

Islamic practice in many Muslim countries permits a woman to have only one husband but a man can have as many as four wives.

Al Shabaab has banned many aspects of modern life and ordered executions, floggings and amputations for crimes such as theft. Its fighters has been harrying the government in the capital Mogadishu with a series of hit-and-run style gun and grenade attacks in recent years, following huge losses of territory.