U.N. Inaction on India
All Actions of the UN Human Rights System Critical of Specific States, 2019 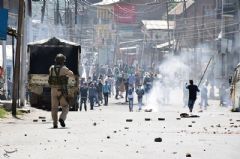 The Kashmiris detained by India more than 700km away from home

India's federal government is believed to have detained thousands of people including activists, local politicians and businessmen in Indian-administered Kashmir since it stripped the region of its autonomy on 5 August. Many have even been moved to jails elsewhere in India. BBC Hindi's Vineet Khare visited one such prison in the northern state of Uttar Pradesh.

It was a hot and sultry Friday morning in Agra, a crowded and dusty city in Uttar Pradesh that is also home to the Taj Mahal.

The occasional breeze made the weather bearable - but not for the dozen men and women from the Kashmir valley, where the temperature is around 18C in September. In Agra, it touches 35C.

The Kashmiris sat in a large waiting hall outside the imposing gate of the Agra Central Jail, and patiently waited their turn for a brief reunion with jailed family members.

Before the Bharatiya Janata Party-led government announced its decision to scrap the special status that gave Kashmir its autonomy, it put the region under lockdown - mobile phone networks, landlines and the internet were cut off; and regional political leaders were placed under house arrest.

The Muslim-majority valley has also witnessed protests and security forces have often clashed with protesters. And thousands of activists and others are believed to have been picked up from their homes in the days that followed the surprise move.

Indian security forces have transferred several hundred detainees from Kashmir to jails in other parts of India, according to media reports. Officials told the BBC that more than 80 of them are being held in Agra.

Agra Central Jail was heavily guarded, hot and smelly. The stink from the toilets wafted into the hall where the families sat, making the wait harder.

"It's too hot. I would die here," says one of the waiting family members, smiling grimly as he wipes his sweaty face with his shirt. "Do not ask my name. We may get in trouble."

He is from Pulwama, a town that is 30km (18.6 miles) from Kashmir's capital, Srinagar. He was waiting to meet his brother, who he says was picked up by security forces on the night of 4 August.

"We were not told where he was taken," he says. "I don't know why he was picked up. He had nothing to do with stone-pelting. He was a driver."

He says he followed up with officials who told him that his brother had been taken to Srinagar. "After a lot of effort, we found out he had been brought here," he adds.

He arrived in Agra on 28 August only to find out that he needed a "verification letter" from local police in Kashmir, confirming his story. So he went back to Pulwama and returned to Agra with the letter.

Abdul Ghani's plight is similar. The daily wage worker made the journey by train and bus from the Kashmiri town of Kulgam to Agra to meet his son and nephew - he had been told that both of them were being held here.

Mr Ghani was also worried as he was not carrying a "verification letter".

"I didn't know I had to carry the letter," he says.

A few gruelling hours later, it was time to for them to go through the gate. Almost all of them had brought fresh apples, the region's most famous produce.

Mr Ghani's pleading paid off and he was allowed to go in. An hour later, he emerged smiling.

"He [my son] was worried. But I told him everything was fine at home," he says. "Thanks to Allah, I met him here. I will come back in a fortnight."

The waiting hall was nearly empty by the evening, when I noticed a woman and a man walking briskly to the prison gate.

They had flown from Srinagar to Delhi, and had hired a taxi to drive them to Agra.

They were allowed to meet their brother for 20 minutes after submitting a request to officials.

"They told us had we come earlier, we could have met him for 40 minutes," says Tarique Ahmed Dar, whose imprisoned brother has three children.

Meetings are allowed only on Tuesdays and Fridays, so if Mr Dar had missed this one, he would have had to wait another four days.

"I spoke to him. His wife, his three children and our parents miss him," Mr Dar adds. "It's tough for them. Now that I have seen him, I will tell them he is fine."